some wooden bowling pin like pins in approximately 3 inches high and about 3/8 of an inch wide placing along the two long sides of the cushions with about 3/4 size of the snooker ball away the cushions and about 18 inches interval (length of 6 pins), playing along with 3 balls - 2 white balls, one with a black dot and one plain white plus a red ball. The wooden pins are also in different points. The left side (green ball cushion side) will place 4 pins with the above said designated spot - The points are 3, 2, 4 & 1. The right cushion side (yellow ball side) will place 5 pins also with the above said designated spot, the points are 1, 6, 2 & 4. Only that behind the 6 point pin there's a black pin placing slightly with an angle. (See Pic. 4)  Also one pin will place between the black and the pink spot worth 5 points. On the yellow spot place a pin worth 10 points and on the green spot there's a black pin. This black pin also act as a guardsman to increase the difficulty of the game so once these black pins are fallen it is act as a foul. (See Pic. 1 for Balls/Pins Starting Position)

The playing rules are placing the opening ball (the white ball with a black dot) between the left cushion and the on the green ball baulk line. The other plain white ball will place between the right cushion on the yellow ball baulk line. Then the red ball will place on the black spot. (See Pic. 1)
To start a game always pot the white ball with the dot first to the red (placed on the designated black spot) to the wooden pins to get some points. (See Pic. 1) When you have gained some points even 1 point counts then draw a number chip out of a small bottle (See Pic. 5) to add up with the total points that you have made throughout the game to make 31 points without putting down the black pins. Then the next player will start potting with the other plain white ball  between the right cushion and the yellow ball baulk line unless it is being moved by the previous shot then you choose to pot with either white balls to the red or to the other white ball with the dot inorder to put down the pins and gain points. Use only white balls to pot the red or white to white, never a red to pot the white or hitting the pin without hitting a ball first, they are considered as foul shots.
開始一個遊戲總是先用”有黑點的白球”擊到紅色至不同分數的木瓶處來取分。（看見照片。1） 你獲得了分數甚至 1 分後便可抽一粒數字珠仔用來合計以後的分數（看見照片5） 整局遊戲首先達 31點或31分便完成。下一位對手以白球將開始擊在右邊的固定開球區和黃色的球之間的 baulk 線 除非第二白球位置因上手球手擊走或佔有, 對於紅色的每個白球或到具點的其他白球。只使用白球或紅色的白球或白色到白色，決不直接擊木瓶，這被視為犯規的Foul Shot, 所有已畈取的分數使告吹。 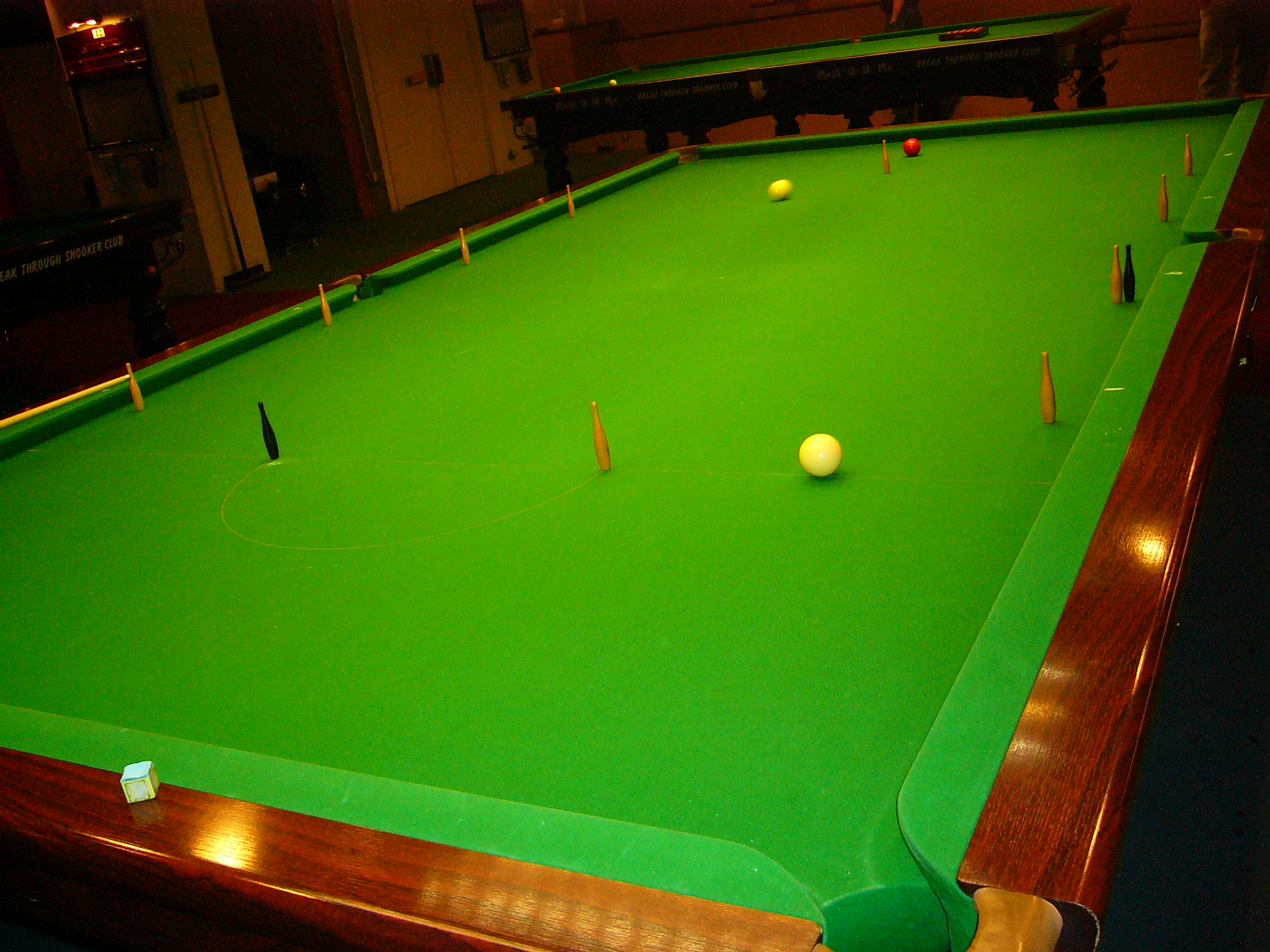 The number chip being drawn will then be placed on the score ball faced down so that people cannot see what your numbers are and can be easily be revealed when the game finished. Each set of points gained to be added up and written on the board to let the players see and analyse the points you have made. (See Pic. 6) 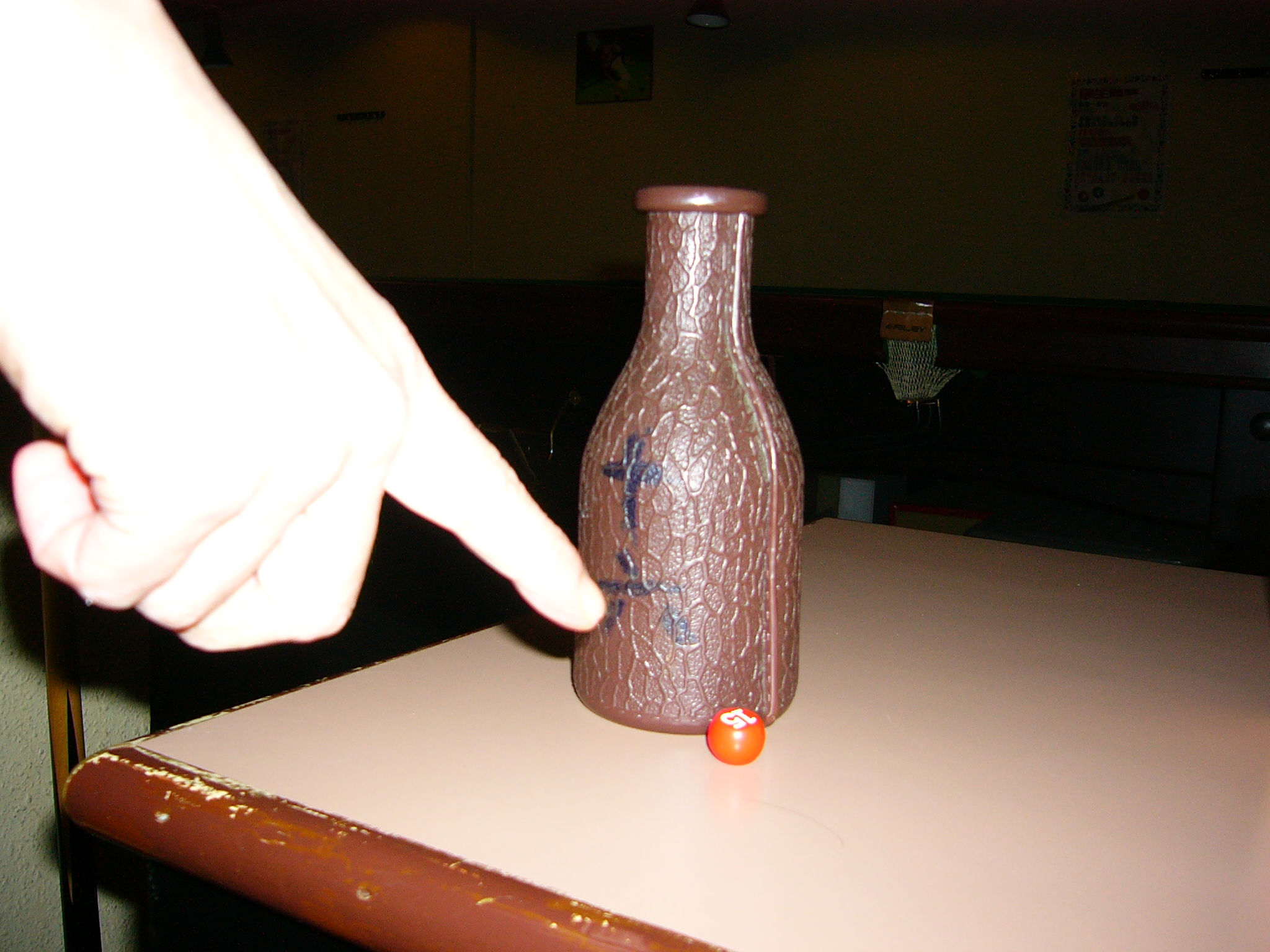 Which means if you potted 10 points and draw a number 5 chip then you need to gain another 16 points to add to 31 points to have won the game.
共有 16 數字代表不同位置瓶仔 :1 至 16 點（看見照片 5）。抽籤被刻印的數字珠仔將放到被朝下放各一指定位置，以便對手在遊戲未結束時看出你的號碼或輕易地被透露。每一次擊中瓶仔的分數加起來和寫在分配的黑板上樣對手來分析你做出了的點數理來處理。（看見照片。6） 如果你用10 點瓶又下個機會也成功取得 5 分瓶的你必須獲得另外16 點來贏取這遊戲合共的 31 點。
Potting a ball or getting in-offs does not gain or lost any points. The main key is positioning for the following players. Normally this game is played from 2 - 4 players. One may play safety shots or even make snooker to avoid your fellow players to gain any points in their turn. All kinds of shots are allowed, screw back, follow through, cannon, swerve but no jump shots and the use of rests are also not allowed. So anyone tall enough to play half table always gain advantage.
擊或in-off”撻死” 不會影響得分。主要是擊球後位置對下位球手的取分定位。通常這個遊戲從 2  - 4 名選手玩。一個可能玩安全球或甚至製作 snooker 避免在輪到他們方面獲得任何得分的你的夥伴的選手。各種射擊法也允許，但不允許”跳球” jump shot和用”加桿叉” rest。尤其個子高的球手總是較優勢。
Pins/Balls are to be placed back to their originial spot/area when an in-off white ball, a potted red ball or a designated pin spot being blocked after a shot. If both white balls are potted, always start to play the "White Ball with the dot" first on their original area. And if the red ball spot is being blocked by a white ball after potting the red in the pocket. The red is to be returned to the designated spot (the black ball spot) and the white ball to be removed back to their orignal designated area.
Each player make only one shot per turn. So if they made too many points in one shot (adds up more than 31 points - pin points + no. chip) or put down the black pins then their whole score points are wiped off replacing with "Cross/es" of the number of pins being put down. Say you draw a 13 point chip but you put down 4 pins that score 5, 4, 10, & 1. (Because adding them up is more then 31 points). Although you have only make 2 points too much, it still counts the number of pins down that busted your game. Then your score are wiped off and put 4 X's on the board and your previous drawn number chip to be returned into the bottle. Each crross/es represents money. Say 1GBP a cross (X). Then this player already lost 4GBP as a base unless he catches up to win the game and save his crosses. Then he will take his turn again to start over again. And when he busted or foul again, "cross/es" is/are accumulated until a winner turns up. Then whoever reaches 31 points first won the game. (The number of points made in total plus the drawn number chip). Each match game say worth 5 GBP then the player who gives you the chance to win that game, normally the one plays before you pays you the game money -the 5 GBP. And the other players who got the cross/es pays the number of crosses worth to the winner.  If no cross/es are made by any player throughout the game then only the player who gives you the winning shot pays you the game money.
This game of accumulating points to match your number chip seemed easy but sometimes you must think of a safety shot after you made the points or even an easier way to get the points without giving your fellow players equal chances. So players will try positions to gain points 3 & 2 or 1 & 4 instead of just getting the single "5" pin.
P.S. There is also an exceptional case when a pin is moved away from its spot by a pot or by other pins but have not been fallen down to the table, the points will not be counted and will remain in that position until the game finished. Same for the black pins.
Bonus for the winner to double their game money :-
1) Starting your very first shot by getting the points and drawing the number chip to make 31 points. Say when you start putting down 15 points pin and you draw number 16 chip to make 31 points or getting 19 points and draw number 12 chip etc. (Each player gets their chance on their very first shot).
2) The winner successfully hit the winning points include the "6" point pin with a black pin behind without having the black pin fallen.
3) When you draw number "1" chip and won the game. 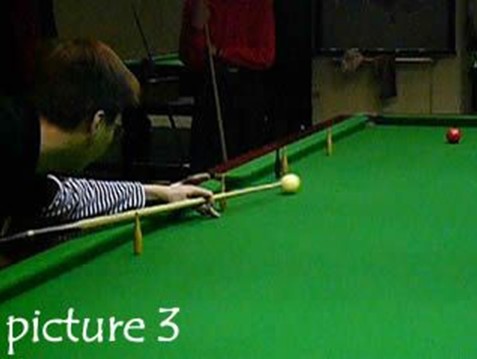 4) To quartral your game money by the winning points include the "6" point pin and having drawn the number "1" chip. 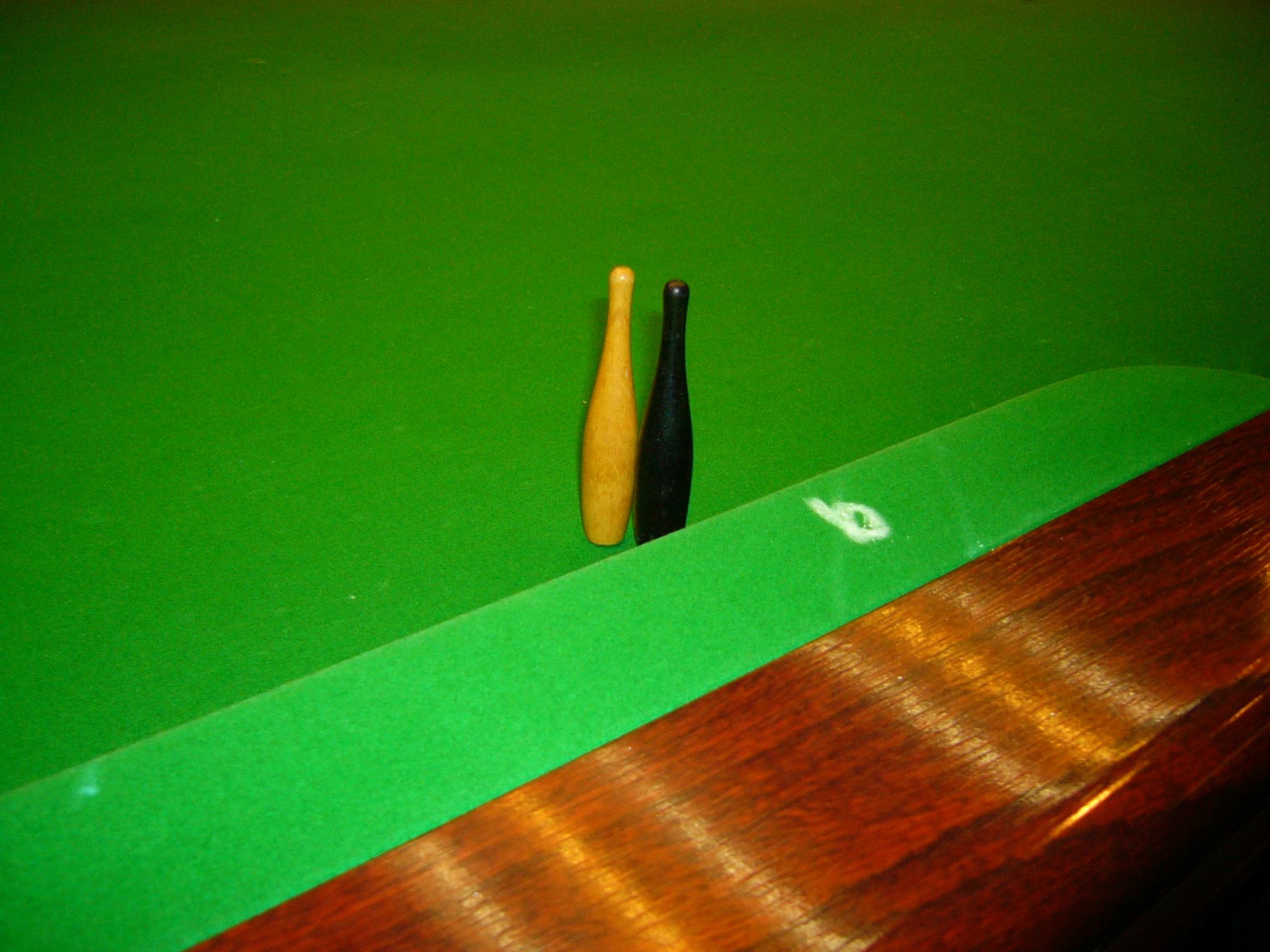 5) To eight times your game money by making 30 points in your very first shot including the "6" point pin without the black pins fallen and having drawn number "1" chip all in one go. (This is so rare to encounter). 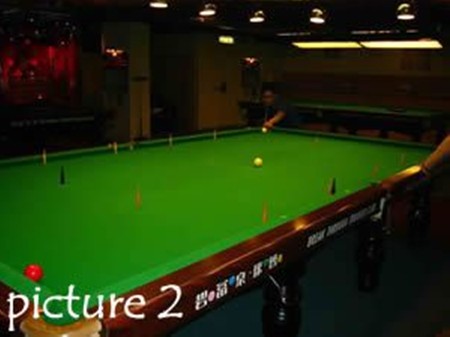 Foul shots are considered as follows :
1) Miss hitting a ball or hit the pins first. (All shots are made ball to ball to pins and not ball to pin directly).
2) Using a red ball to hit the whites!
3) Having placed the white ball on incorrect designated opening spot and made the shot.
4) Putting the pins down by your body or clothings while feathering or making the shot.
5) Making jump shots or potting balls off the table.
Well, I hope it sounds interesting to you as when I play this game I learned a lot of postioning, making shots, control of cue power, canoning, safety shots and angles etc. which benefit and extend my snooker game knowledge.
Well, this is all I know of this game since we don't have the original rule book as this game has been passed from old snooker players or snooker clubs to us. Please correct me if I am wrong. I have tried to source this game through the internet but they only showed me other kinds of old Skittle Games apart from this one and I really wish that I could find the original Rule Book to this game.
In Hong Kong, most snooker players play for something :- Money $$, Cigarettes, Drinks etc, and mostly loosers pay the frame fee in addition to their prize!!
Well, in my next email, I will tell you another interesting game that we also play in our snooker club in Hong Kong . . . Be sure you're with me.
Cheers, Felicia