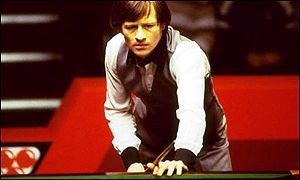 Alex Higgins, one of snooker's all-time greats, died today on Saturday after a long battle against cancer

The two-times World Champion, who was aged 61, was found dead by carers in his flat in his native Belfast.
He had suffered from the affects of throat cancer for 12 years, and his weight recently plummeted to seven
stone because of a problem with his teeth which prevented him from eating solid food. Friends raised £20,000
so that he could have new teeth fitted, but he was too frail to have surgery.

World Snooker Chairman Barry Hearn said: "He was the major reason for snooker's popularity in the early days.
He was controversial at times, but he always played the game in the right spirit. We will miss him –
he was the original people's champion."

Born in 1949, Higgins started playing snooker at the age of 11 in the Jampot Club in Belfast. Soon he was
beating older boys and men, and legend has it that he walked quickly around the table to avoid clips on the
ear from incensed opponents. Later, his rapid and attacking style would earn him the nickname
'The Hurricane'.

After considering a career as a jockey, he focussed solely on snooker and turned professional age 22.
Remarkably, he won the World Championship at his first attempt in 1972, beating John Spencer 37-31
in the final. Higgins captured the imagination of the snooker public, his personality and playing style a
dramatic departure from the traditional image of a snooker professional. Young, flamboyant, from a
working class background and wearing his heart on his sleeve on and off the table, he was a player that
the ordinary man could relate to. His technique was also anything but orthodox; his whole body seemed
to be on the move as he struck the cue ball, but somehow the balls nearly always found their target.

More than any other player, he helped transform snooker from a niche game into the most popular sport
in Britain by the early 1980s, with millions turning on the television whenever he was playing, and
hundreds packing the venues of the major events..

In 1982 he won his second World title; the gap of ten years between his first and second crown remains
a record. With perhaps the most extraordinary break in snooker history, including a sequence of improbable
pots slotted into pockets around the table, he defeated Jimmy White 16-15 in the semi-finals, and went
on to beat Ray Reardon 18-15 in the Crucible final. The moment when his wife Lynn and baby daughter
Lauren joined him on the stage, Higgins in tears as he clutched the infant in one hand and trophy in the
other, is among the most memorable in televised sport. He was also World runner-up in 1976 and 1980 and
won the Masters in 1978 and 1981. ALEX HIGGINS, 我們永遠懷念你!
R.I.P.  YOU WILL ALWAYS BE OUR
PEOPLE'S CHAMPION!

~A song from Alex Higgins to you~