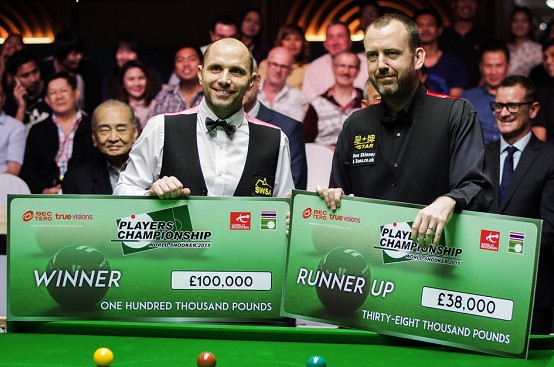 Joe Perry has won the first ranking title of his career by beating Mark Williams in the final of the Players' Championship in Bangkok, Thailand.

"I've been playing snooker since I was 12 and all I've ever wanted is to win a major tournament," said Perry, 40.

"I've been really composed all week. I have been very calm at the table and haven't got nervous," he added.

Welshman Williams appeared on course for his 19th ranking title - and first since 2011 - after winning the first three frames with breaks of 64, 57 and 103.

But Perry won a scrappy fourth, then levelled the scores with breaks of 50 and 56, before runs of 54 and 24 sealed the decider.

He had seen off compatriot Stuart Bingham 4-1 in the earlier semi-final while Williams completed a 4-2 win over Judd Trump.