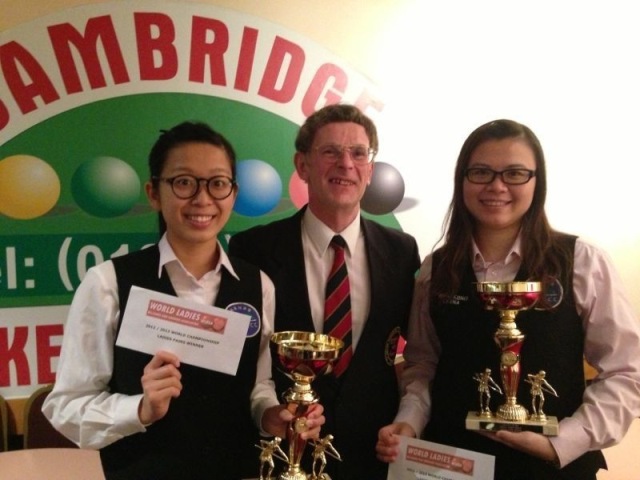 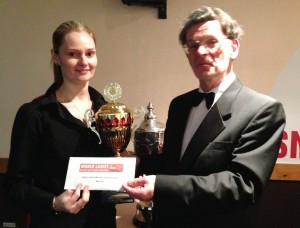 Reflecting on her remarkable record, Evans said: “Nobody ever dreams about doing things like that. I’m over the moon.”

“I play every tournament like it’s a fresh one otherwise there’s too much pressure. The pressure’s on me to lose it not for them to win it.”

It was the fourth time in five years that the friends from Dudley, West Midlands, had met in the world final.

Evans kicked off with a 100 clearance in the first frame and added a 60 and a 117 clearance straight after the mid-session interval to take a 5-2 lead.

Catalano, 30, still seeking a first world title, pulled one back with a run of 44 but Evans wrapped things up in the next.

“It’s good to have two centuries, especially in a final,” said the newly-crowned champion. “It’s good to bring it off the practice table because I do it all the time in practice.”

But she added: “It’s hard to get used to the tables because I’m not used to club tables any more.”

Earlier, in the main event, Jones defeated number two seed Emma Bonney 3-0 en route to topping her round-robin group before being knocked out 3-0 by Yu Ching Ching in the quarter-finals.

Hong Kong compatriots Ng On Yee and So Man Yan, champions in 2011, accounted for Maureen Rowland and Tatjana Vasiljeva 2-0 to collect their second Ladies Pairs crown.

Latvian Vasiljeva, who missed out on a fourth straight Mixed Pairs trophy, defeated Poulter 3-0 in the Plate final.

The high-break prize of £50 went to Evans for her 117 against Catalano.

The WLBSA thanked Tony Carr and his staff at Cambridge Snooker Centre, and Jamie O’Neill for stepping in at short notice in the Mixed Pairs as a replacement for fellow professional Joe Perry, who was involved in a world championship qualifier.